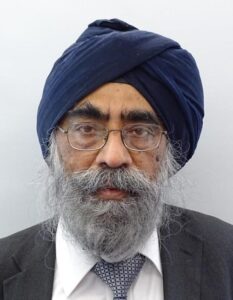 A consultant physician at the Royal Blackburn Hospital has been awarded a CBE in the New Year Honours List.

Professor Iqbal Singh, 70, was born and raised in Simla, India, and has worked for the NHS since 1974.

He began working in Blackburn in 1983 after roles in Sheffield, Birmingham and Kent and is presently a consultant physician in medicine for older people at the East Lancashire Hospitals Trust (ELHT).

Prof Singh has been a contributor to healthcare and medical regulation in the UK for decades and was described as a ‘pioneer in ethnic health and diversity, and a leader in the care of older people and patient safety equality and inclusion’.

Prof Singh, who lives in Blackburn, said: “I view this as a great honour and not just individual recognition but the recognition of our work in care of older people and in promoting equality fairness and compassion within the NHS.”

Through his work he has been transforming how health and social care professionals are educated and regulated in care for patients nationally and internationally and how they embed ‘a culture of compassion safety and dignity’ within health organisations.

He is the founder chair of the Centre for Excellence and Safety for Older People and chair of the European Group on Safety for Older People. He has made contributions over the last three decades in promoting equality and fairness in the working lives of BME doctors in the NHS. He has chaired the General Medical Council’s equality and diversity committee.

He founded and chaired Diversity Partners, and currently chairs the GMC BME Forum which is a voice and influence on equality issues. He also serves on the Health Honours Committee and Cabinet Office Honours Diversity and Inclusion Committee helping improve wider recognition.

Speaking about the NHS during the pandemic he said: “Covid-19 has had a huge and unprecedented effect on all communities and healthcare staff.

“The healthcare and social care staff have risen to the challenge but are beginning to feel the strain. We have established a centre for support for doctors which aims to build resilience and develop professionalism in the medical community.”