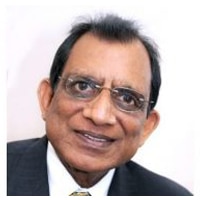 Professor Romesh Gupta, until retirement, worked for nearly three decades as consultant physician at the Lancashire Teaching Hospitals NHS Foundation Trust, where he led the stroke services and served as a governor. In addition to his hospital commitments, he played various leading roles at national level with NHS Employers, the Department of Health, the General Medical Council, the National Clinical Assessment Service, the Commission for Health Improvement, the Royal College of Physicians, the British Medical Association, the British International Doctors’ Association, and the British Association of Physicians of Indian Origin.

He was also a director of the Preston and West Lancashire Racial Equality Council.

Professor Gupta is currently Director of the Centre for Research in Health & Wellbeing at the University of Bolton and Chair of the National Forum for Health & Wellbeing. In addition, he serves as a secondary care specialist member on the Bolton Clinical Commissioning Group (CCG) and is a member of the judicial tribunals. He was a Founder Director of the Multi-Cultural Studies Centre and has designed and helped to deliver professional development courses for Senior Specialist Registrars for the Mersey Deanery. He has delivered training on mentoring, appraisal and revalidation for consultants and other NHS staff. Professor Gupta is author of over 50 publications including three books.

Over the past seventeen years, Professor Gupta has pioneered the introduction of community health fairs across the Northwest and further afield, developing the ‘Health Mela’ model to improve health awareness and empower hard to reach as well as BME communities to take charge of their own health and wellbeing.

Professor Gupta received a Gold Award for Clinical Excellence from the Department of Health and is presently a member of the Northwest Regional Advisory Committee for clinical excellence awards. Professor Gupta has been awarded a Paul Harris Fellowship from Rotary International and was appointed Officer of the British Empire (OBE) in 2008 for services to medicine and the community of Lancashire.