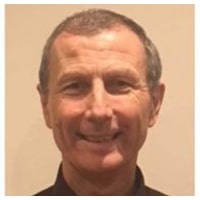 After growing up in Hertfordshire Dr Nick Roberts graduated from Manchester Medical School in 1981. After a period of research at Manchester University he trained in General Internal Medicine and Geriatric Medicine in the North West of England and was appointed Consultant Geriatrician and Physician at East Lancashire Hospitals Trust (ELHT) in 1991.

His clinical interests are in Stroke Medicine, Frailty, Delirium, Dementia and Parkinson’s Disease. He is currently Clinical Director in the Department of Medicine for Older People at ELHT and is also Clinical Lead for Dementia for the Trust and Clinical Lead for the Telestroke Service for Lancashire and Cumbria.

Since his appointment as a Consultant in 1991 he has participated in research into the treatment of acute stroke and secondary prevention of stroke. He has an interest in education and at various times has held posts as Foundation Programme Director at ELHT and Training Programme Director for the North West of England Geriatric Medicine Registrar Training Programme which had strong links to Salford University where he is an honorary Senior Lecturer. Dr Nick Roberts also has an interest in appraisal and is an appraiser for consultant colleagues and junior doctors at ELHT.