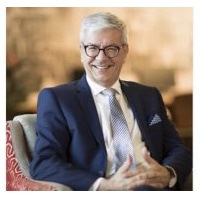 Robert began his career as a Telecommunications Engineer working for Post Office Telecommunications. He followed a number of career moves and became a Senior manager with expertise in business process and organisational development. For many years Robert worked in BT Europe with the team responsible for setting up Joint Venture companies. He subsequently headed the BT Europe Alliance Services Unit providing a range of business and consultancy services.

Taking early retirement form BT Robert became a NED on the Board of Wrightington Wigan and Leigh NHS Foundation Trust (WWL), he became Chair of WWL in 2014. Robert is proud of the achievements of WWL especially becoming the Foundation Trust of the year in 2014.

Robert serves as a School Governor in a challenged area of Wigan, with a particular focus on raising the aspirations of children in the school.

Robert is also a Non Executive Director of Belong – a not for profit company owning and managing Belong villages- Belong provides a unique high quality service to the older community and in particular those living with Dementia.

Robert sees a great opportunity through CESOP, to raise the levels of quality and safety of individuals, and providers who care for the older people in England.